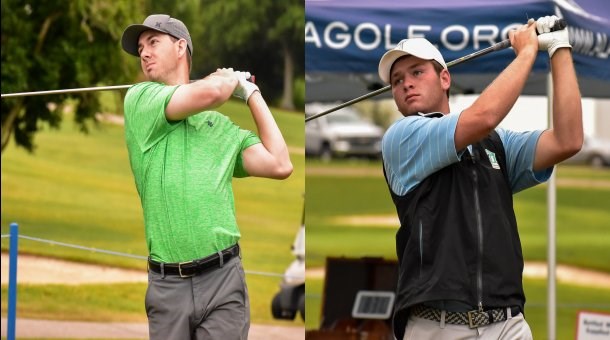 Trent Alexander of Florence (left) and Will McFadden of Mobile (right)

Playing the day in tough, rain-soaked conditions, Will McFadden of Mobile and Trent Alexander of Athens each fired a four-under 68 to share the lead after 18 holes.

“The rain helps to make sure you stick to your game plan and focus on each individual shot,” McFadden said.

Only 11 players were able to break par in round one with an average score of 77.6.

Defending champion Matt Lorenz of Fairhope carded a seven-over 79 to stand in a tie for 99th place.

After 36 holes, the field will be cut to the low 60 players and ties for the final two rounds.

Any male amateur golfer who is a legal resident of Alabama, and has an active GHIN® USGA Handicap Index® at an AGA member club that does not exceed 8.4.

For more information on the Alabama State Amateur Championship including hole-by-hole scoring and round two starting times please visit:  https://www.alabamagolf.org/2019-championships