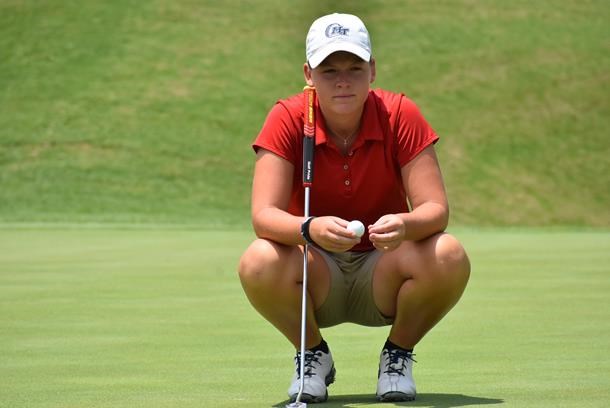 With two-over par 73s, Sophie Burks of Equality and Carson McKie of Hoover tied for medalist honors. Burks’ round included three birdies with halves of 35 and 38. McKie made two birdies and an eagle over the 18 holes. Burks heads into the match play stage as the first seed while McKie will play as the second.

Following completion of play six players were tied for 13th place with an eight-over par 79. These six players competed in a sudden death playoff for the final four spots in the championship division. Mary Mac Trammell of Birmingham, Susie Stell of Troy, Morgan Prickett of Jacksonville, and Chloe Borders of Jacksonville survived the playoff to qualify for the championship division match play.

Other notable players to qualify for the championship division match play include 2013 Alabama Women’s State Amateur Champion, Cammie Bentley of Northport, who qualified as fourth seed. Bentley posted a three-over par 74 in today’s qualifying round. Her round included birdies at holes three, ten, and 16.  Bentley will go head-to-head against Mary Mac Trammell in the first round of the match play stage.

In the tournament division, Linda Jeffrey of Prattville posted a five-over par 76 to lead the qualifying round. Jeffrey will be joined by Ann Lanier of Fairhope and Nancy Gavin of Jacksons Gap in a three-player match to be completed over 36 holes, 18 holes tomorrow and 18 holes on Friday. The final two players in the division will also play a 36-hole match over the final two days.

The senior division was led by five-time champion, Chris Spivey of Pell City. Spivey carded a six-over par 77 to head into the match play as first seed and will play Marsha Andrews of Ashville in tomorrow’s first round of match play.

The first round of the championship division match play will tee off at 7:30a.m. at The Country Club of Birmingham.

Visit www.alabamagolf.org for live scoring and photographs from the first day.