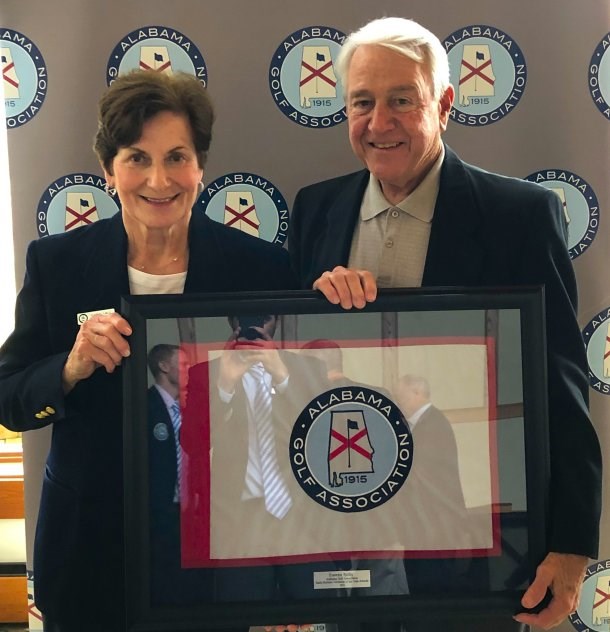 HOOVER, Ala. (February 23, 2019) -- On Saturday, February 23, 2019, the Alabama Golf Association’s Annual Meeting, Board of Directors meeting and Awards Luncheon was hosted by Old Overton Club in Vestavia Hills.

Annual Meeting and Board of Directors Meeting

At the Board of Directors meeting, three members were elected to serve a one year term on the AGA Executive Committee along with the four officers: Joey Dzwonkowski of Mobile, Immediate Past President Grantland Rice III of Birmingham and Susan C. West of Tuscaloosa.

The Alabama Golf Association recognized the Sadie Roberts Volunteer of the Year, Players of the Year, All-State Junior Teams and 2018 champions at an awards luncheon that followed the annual meeting.

Sadie Roberts Volunteer of the Year Award: Everette Kelley of Birmingham received the Sadie Roberts Volunteer of the Year Award. Kelley has served as the association’s course rating captain for the past 22 years. During his tenure, Kelley has visited every golf course in the state, recruited and trained dozens of volunteers and been involved with hundreds of course ratings which is a core service provided by the Alabama Golf Association.

Alabama All-State Junior Teams: All-State team selections are determined from junior golfers performance over the past 12-months (September 1, 2017-August 31, 2018) using the Alabama State Junior Golf Rankings System. The top 15 boys and girls are awarded and placed into First, Second and Third teams based upon their final ranking.