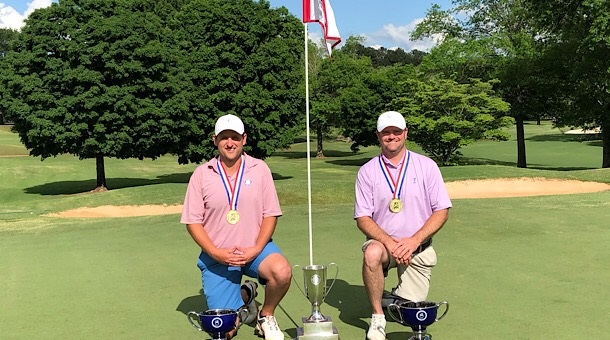 Clay Guerin of Hoover and Will Swift of Vestavia Hills

Will Swift of Vestavia Hills and Clay Guerin of Hoover got out to an early lead with a birdie on the par four 3rd hole and remained 1 up through the front 9 at Huntsville Country Club.  Holder and Gourgeot squared the match after Holder sank the par putt on the 11th.   Swift then rolled in a birdie on the 13th to regain the lead. Guerin then followed it up with a birdie two on the 15th, which would prove to be all they needed to defend their Alabama State Four-Ball Championship title winning 2 and 1.

In the morning semifinals, Swift-Guerin defeated eighth seed Andrew Kniphfer and Elliott Jones of Tuscaloosa, 4 and 3.

Holder-Gourgeot advanced past Brendan Keller of Huntsville and Jason Tate of Owens Cross Roads by a 4 and 3 margin.