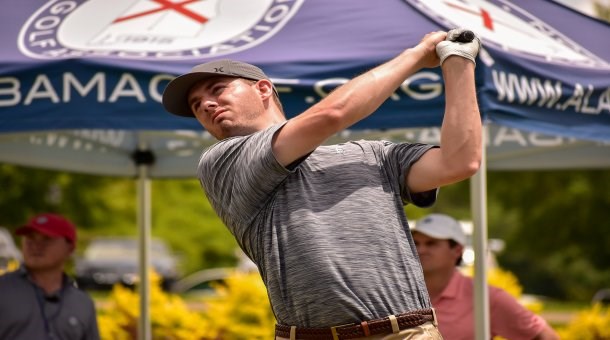 Trent Alexander of Athens, Ala. teeing off for Round Two of the State Amateur Championship

Trent Alexander of Athens carded a three-under 68 to stand atop the leaderboard at 136 (-7). Alexander is one stroke ahead of round one co-leader Will McFadden of Mobile.

The 435-yard par 4 sixth hole played as a 182-yard par 3 today due to unplayable conditions on that hole’s landing zone which changed the course from its traditional par-72 layout to a par-71. Woodie Eubanks of Oneonta made a hole-in-one on the makeshift par 3 hole holing a 7-iron.

The field was cut to the low 60 players and ties for the final two rounds. The cut line fell at 149 (+6) with 64 players advancing to weekend play.

Any male amateur golfer who is a legal resident of Alabama, and has an active GHIN® USGA Handicap Index® at an AGA member club that does not exceed 8.4.