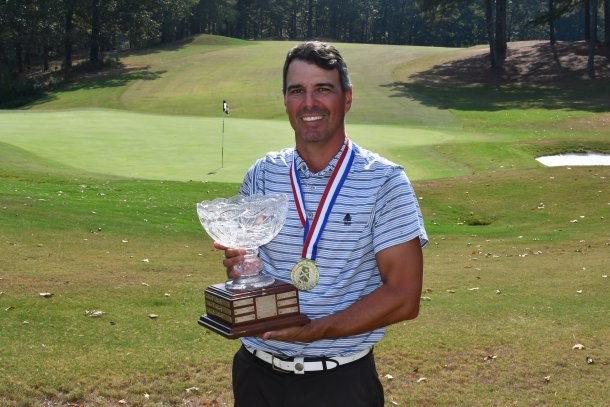 Playing in the group ahead and starting the day four shots back of the lead, Clay Guerin of Hoover, stood at five-under for his round that propelled him to the top of the leaderboard for most of the back nine including a share of the lead standing on the 18th tee. However an errant tee shot on the final hole led to a bogey that dropped him back to 211 (-5) and third place finish for the championship.

Kyatt, a member at tournament host Pine Tree Country Club, now needed a birdie on the final hole to catch Eubanks. Kyatt hit his approach to 50 feet while Eubanks almost holed his second shot that landed two inches from the hole and settled to 10 feet. Kyatt was first to play and holed his miraculous 50-foot birdie putt to tie Eubanks at 209 (-7). Eubanks now had to make his birdie putt to win but his effort just slid by the left edge forcing a playoff.

In the playoff, Eubanks’ tee shot plugged in the fairway bunker and had to pitch out down the fairway. From the fairway, Kyatt hit his approach to 40 feet. Eubanks hit his third shot to 25 feet leaving a lengthy par putt. Kyatt was first to putt and snuggled his birdie effort to one foot. Eubanks missed his par putt leaving a tap in for Kyatt to win the championship.

Two-time defending champion Stewart Whitt of Athens posted a final round 75 to finish in a tie for 28th place at 225 (+9).