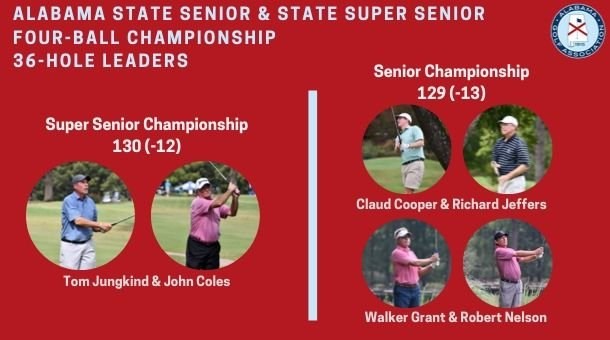 In the Senior Championship, Robert Nelson of Fairhope and Walker Grant of Montgomery fired a seven-under 64 to tie for the 36-hole lead with Claud Cooper of Birmingham and Richard Jeffers of Mobile at 129 (-13).

Nelson hit the shot of the day with a hole-in-one on the 174-yard Par 3 15th hole using a 7-iron for his seventh career ace.

In the Super Senior Championship, John Coles of Birmingham and Tom Jungkind of Hoover carded a second consecutive round of six-under 65 to extend their lead to three shots over Bob Straub of Courtland and John Stewart of Hoover.