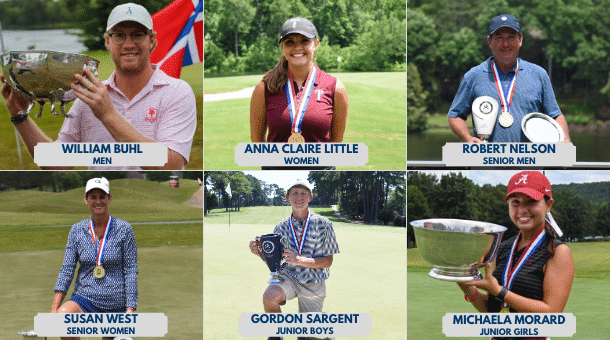 The Alabama Amateur Player of the Year awards are presented to the number one ranked individual in each of six categories at the end of the calendar year based on the AGA’s state amateur ranking system except for the two junior awards that utilize a September-August calendar year. The Men’s Player of the Year Award was first created in 1994 to honor Alabama amateur golfers who had exceptional individual tournament performances during the year. Since then, the awards have been expanded to include Women (2010), Senior Men (2016), Senior Women (2016), Junior Boys (2017), and Junior Girls (2017).

Winners will be honored at the AGA Awards Luncheon on Saturday, March 7, 2020 at The Old Overton Club in Birmingham.

Complete rankings are available on the Alabama Golf Association website at www.alabamagolf.org.

Gordon Sargent, 2021, of Birmingham wins his first Alabama Junior Boys Player of the Year award. He won the 74th Alabama Boys State Junior Championship and his first AGA title by six strokes at Indian Hills Country Club in Tuscaloosa posting a 201 (-12) score. He finished second at the Bobby Chapman Junior Invitational, qualified for the U.S. Junior Amateur where he advanced to the Round of 64, and made the cut at the Junior PGA Championship. Sargent also finished in a tie for second at the AHSAA 7A State High School Championship. Currently a junior at Mountain Brook High School, he has committed to play collegiately at Vanderbilt University.