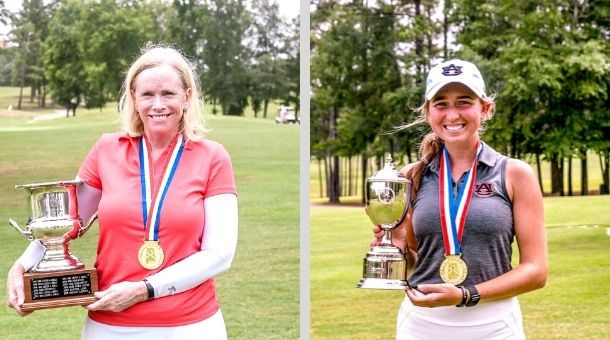 Hartwiger fired a three-over 74 for her final round, giving her a one-stroke lead over Susan West of Tuscaloosa. Hartwiger carded an impressive six-over 219 to be crowned champion.

Chris Spivey of Pell City shot four-over 71, with an overall score of 16-over 229 to stand third place.

Debbie Atchley of Pelham posted an 81 to claim first place in the Tournament Division.

Barbee Bryant of Hoover shot a 10-over 81 for the final round, with an overall score of 31-over 244 to stand second place in the Tournament Division.

Mychael O'Berry of Hoover shot two-under 21, overall, to be crowned champion of the 30th Alabama Women’s Stroke Play Championship. Her final round par-71 placed her atop the scoreboard.

Sophie Burks of Tallassee posted a two-over 73 for her final round to stand second place. Overall, she carded an even 213.

Laura Beth Yates of Lake View posted a 17-over 87 to take first place in the Tournament Division.