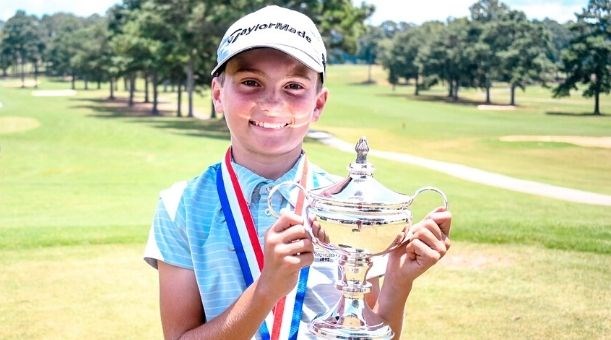 Round 2 13U State Junior Scores

Tyler Watts, a 12-year-old native of Huntsville electrified the field firing an 11-under 61 with a two-day total of 133(-11). Watts claimed the title of 1st Alabama Boys State 13 & Under Junior Championship while simultaneously setting a new tournament tee record. Watts commented on setting the new tournament record, saying he is honored and “at a loss for words.”

“The hole looked pretty big today,” Watts said. “Everything that missed yesterday went in today, so I just played really well. All the putts fell, so that’s what counts right? I think my eagle putt on No. 15 was a momentum changer, and that’s what made me start to realize that I could go low.”

Round two co-leaders of the 75th Alabama Boys State Junior Championship are future Auburn golfer Max Johnson of Fairhope and Kenneth Okins of Anniston. Johnson carded a three-under 69 today with a two-day total of 135 (-9). Okins carded a four-under 68 with a two-day total of 135 (-9). Johnson and Okins stand tied heading into the final round tomorrow.

“This is my last junior tournament that I’ll ever get to play in,” Johnson said. “It's very motivating to try to come out and win this.”

Okins commented on his successful round two.

“On the back nine I started to play really well,” Okins said. “I hit everything within about five-feet for four birdies, so it was pretty good.”

Graham Patton brought his A-game to the field today and won the 8-11 Age Division, shooting a two-under 34 with a two-day total of 71(-1).

“It felt pretty good shooting two-under, but it was a beautiful day and that was probably the best part,” Patton said. Patton shared that his favorite shot of the day was a four-foot putt on 17.

The field will be cut to the low 60 players and ties after 36 holes. The cut will be at two-over.