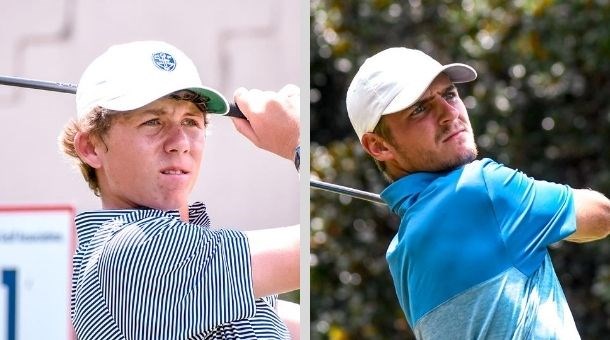 Fifty players returned to Saugahatchee Country Club this morning to resume round one of the 104th Alabama Men’s State Amateur Championship.

Drew Mathers of Mobile and Gordon Sargent of Birmingham co-lead round two of the 104th Alabama Men’s State Amateur Championship, each posting a six-under 66 for the day. Both players remain nine-under 135 altogether.

Sargent finished his three remaining holes to close out round one, shooting three-under 69. Sargent’s stamina launched him toward success as he birdied Nos. 1, 2, 10, 12, 15 and 16 to climb atop the leaderboard.

“I knew that if I hit it pretty close again, I could make some putts,” Sargent said.

“I hit more fairways today than I did yesterday,” Mathers said. “I’ve just got to do that the next couple days to keep it going.”

Standing in third place, Nick Robillard of Birmingham and Noah Martino of Mobile are eight-under 136. Robillard posted a seven-under 65 for the day. Martino carded four-under 68.

“Yesterday I kind of got off to a rough start, I was really timid,” Robillard said. “On the back nine, I figured it out and made three birdies coming in to post one-under. It was a huge momentum boost for me.”

The final cut includes the top 61 players (including ties) in the field for rounds three and four.