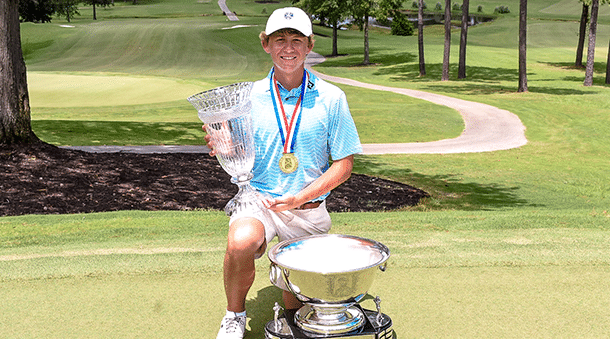 Gordon Sargent of Birmingham made history, victoriously breaking the tournament score record of the 104th Alabama Men’s State Amateur Championship. His record-shattering 24-under 264 beats the former record of 270, formerly held by Matt Lorenz of Fairhope (2018).

Sargent, at 17-years-old, is the youngest player to win the Alabama State Amateur in the modern era. He claimed his title as Champion, holding a five-stroke lead over Jacob LeCroy of Anniston.

“It’s nice to put it all together and make some birdies,” Sargent said. “This gives me major momentum heading into the U.S. Amateur.”

LeCroy broke the tournament score record by one-stroke, shooting 19-under 269. His impressive final round of seven-under 65 earned second place standing.

“You know, I was obviously coming after Gordon,” LeCroy said. “I wasn’t trying to sit back and let him take it, but he did. I broke the total, but he shattered it. He is the best golfer I’ve played with in a long time, and he’s on his way up.”

In third place, Drew Mathers of Mobile shot 16-under 272. University of Alabama Birmingham’s (UAB) transfer posted three-under 69 for the final round.

“Today, there was no catching Gordon,” Mathers said. “I would’ve had to shoot 60 to beat him by one overall. Hats off to him!”

UAB’s Nick Robillard posted one-under 71 for the day, to stand fourth place. Overall, he carded a low 13-under 275.

Noah Martino battled throughout the week to hold Top 5 standing, posting an even-72 for the final round. Altogether, Martino shot 12-under 276.