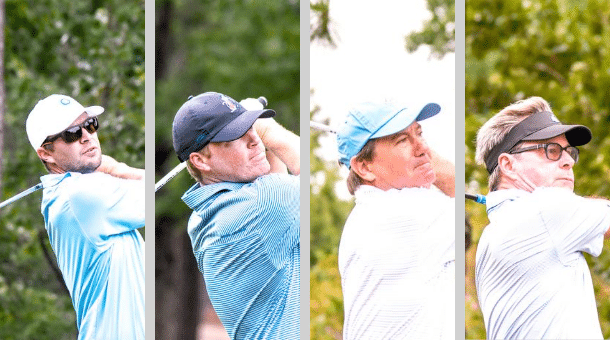 Atop the scoreboard within the Mid-Amateur Division, Hunter Hawkins of Leesburg, AL and Will McCurdy of Auburn, AL lead at seven-under 65. They remain one-stroke ahead of four teams standing T2.

Leading the Senior Division, Robert Nelson of Montgomery, AL and Walker Grant of Fairhope, AL carded nine-under 63 to take a one-shot lead. Their round included seven birdies and one eagle.

Nelson shared his excitement over the day with us.

“With a back injury, I was kind of grinning and bearing it all day long,” Nelson said. “I just had one of those days, six birdies and an eagle. It was crazy to shoot that score, not feeling 100 percent.”

Tied for second place within the Senior Division are Joey Fortner of Hoover, AL and Kevin Newton of Birmingham, AL alongside Bob Royak of Alpharetta, GA and Paul Royak of Tampa, FL. Each team posted an eight-under 64.

Championship Format: 54 holes of Four-Ball stroke play. Field will be cut to low 30 scores and ties after 36 holes. The number of sides making the cut is calculated based upon the percentage of sides in each division compared with the total field. In the event of a tie for first place in the Mid-Amateur or Senior Division, a hole-by-hole playoff will be held immediately following play. The play-off holes and their order of play will be determined by the Championship Committee. All other ties will be split equally. Initial groups will be for the first two rounds; the field will be cut and re-paired by the score after the second round.

Eligibility:
Entries are open to sides of male amateur golfers who have an active USGA Handicap Index® issued through a USGA Allied Golf Association. Maximum allowable combined team handicap is 8.8 for the Mid-Amateur Division; 12.8 for Senior Division under the USGA Handicap System™. Two players who play as partners comprise a side. Partners are not required to be from the same club or state. Both members of the side must qualify under the following age requirements:

Visit www.alabamagolf.org for live scoring and follow us on social media: Twitter (@bamagolf); Instagram (@alabamagolf).
This championship is co-conducted by Willow Point Golf & Country Club and the Alabama Golf Association.

About Willow Point Golf and Country Club
In 1964, the last of the Russell Farms cattle farms, locally known as "the Wedges Farms," (having once been a farm where workers were hired for "wages") was chosen as the location of the Willow Point Golf and Country Club.
This beautiful championship 18-hole golf course meanders about on a peninsula totally surrounded by Lake Martin. Designed by Thomas Nichol, the par 72 course was constructed as a private club to replace the original course, which was given by the Russell family to the State of Alabama for the site of the Alexander City Junior College (now Central Alabama Community College).