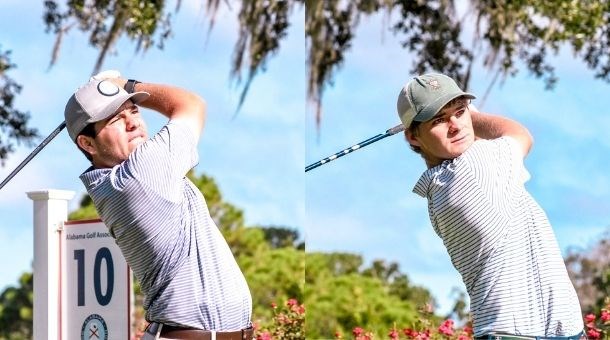 George Hall of Auburn, AL and Harlan Winn of Birmingham, AL fired six-under 66 to lead round two of the 38th Alabama State Four-Ball Championship. Overall, they are 14-under 130, holding one-stroke over Brett Greene and John Wright of Fairhope, AL and Brinson Holder of Point Clear, AL and Matt Gourgeot of Decatur, AL.

Winn secured his team lead by sinking a 40-footer putt on No. 11 for birdie.

“We brother-in-lawed it really well,” Winn said. “We hit it straight but putting well really helped us today.”

Tied for second place, Holder and Gourgeot carded seven-under 65 for the day. Greene and Wright shot five-under 67. In total, each team remains 13-under 131.

“As I’ve been reminded by some of the other guys, we’re the second oldest team in the field,” Greene said. “Experience does matter a little bit. But we are going into tomorrow, just like we have the past few days, to have fun.”

The final cut includes 32 teams advancing to the Championship round. The line fell at one-under 143.