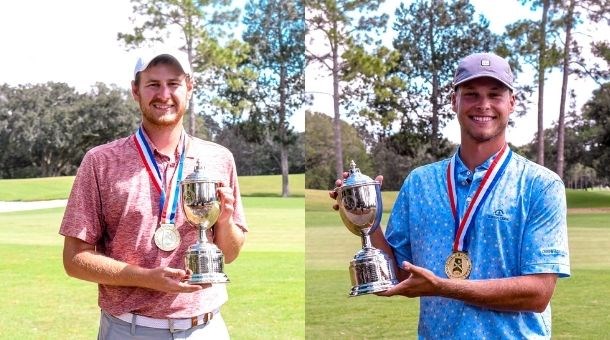 Johnny Komara and Tim Harwick of Huntsville, AL carded a victorious eight-under 64 in their final round to be named Champions of the 38th Alabama State Four-Ball Championship. Together, they posted an overall 19-under 197.

To seal the deal, team Komara and Harwick birdied four out of their last seven holes.

“We ham and egged well all week,” Harwick said. “I didn’t necessarily think that we had it in us after we bogeyed two, but we just got hot. We birdied from there on out. 19-under with five bogey’s, that’s not too shabby. I’m thrilled!”

Connor Reid of Alexander City, AL and Dylan Moncus of Opelika, AL tied for second with Brinson Holder of Point Clear, AL and Matt Gourgeot of Decatur, AL. Reid and Moncus carded a six-under 66 to finish the day. Holder and Gourgeot posted four-under 68 to conclude their final round. Overall, each team shot 17-under 199.