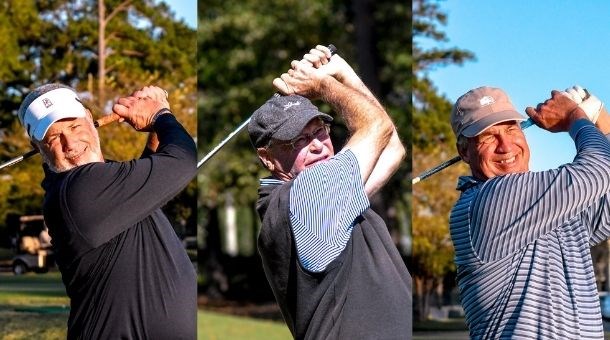 Charles Noto of Birmingham, Alabama and Mike Arasin of Auburn co-lead round one of the 23rd Alabama State Senior Amateur Championship. Each player carded a three-under 69 to stand T1 and remain two-strokes ahead of the field.

“The golf course is in really great shape, especially after having a hurricane come through two days ago,” Noto said. “Tomorrow, I’ll try to keep the ball in front of me on fairways and greens. Hopefully a few more putts will go in.”

Richard Jeffers of Mobile, Alabama leads round one of the 2nd Alabama State Super-Senior Amateur Championship. He posted a three-under 69 for the day.

“It’s my first Super-Senior, so I didn’t know what to expect,” Jeffers said. “I’m very lucky to shoot what I shot, and hopefully I can tighten it up tomorrow. Buddy Alexander’s so good, he’s world class. Hopefully I can hang in there with him!

“Tomorrow I hope to hit it more solid and give myself more opportunities for birdie,” Alexander said.

Fred Clark of Mobile is even for the day with a 72, holding third place for round one.