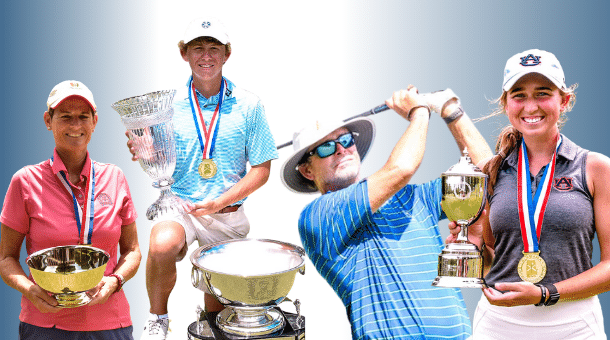 HOOVER, AL (January 6, 2020) – The Alabama Golf Association (AGA) has announced the 2020 AGA Players of the Year. To honor Alabama amateur golfers who performed exceptionally in the preceding tournament season, the AGA identifies award recipients as the number one golfer based on a season-long ranking system.

​​​​​​​In 1994, the Men’s Player of the Year Award was established. Throughout time, the award expanded to include Women (2010), Senior Men (2016) and Senior Women (2016), Junior Boys (2017), Junior Girls (2017).
Seven Alabama Men's Players of the Year have competed on the PGA Tour or PGA Tour Champions. Notable past award winners include Garrett Osborn (2000), Patton Kizzire (2003), Bobby Wyatt (2011-2012), Michael Johnson (2013), and Robby Shelton IV (2015). Will Swift (2002, 2005, 2006) and Steve Hudson (2004, 2009, 2010) are tied for the most awards with three apiece.
Complete rankings are available on the Alabama Golf Association website at www.alabamagolf.org.
2020 Alabama Amateur Player of the Year Award Winners
Men’s
Gordon Sargent of Birmingham is a senior at Mountain Brook High School. He won his only AGA start in 2020 – This included his record-breaking performance at the Alabama State Amateur Championship. He made it to the Round of 16 at the North and South Championship, made the cut at the Southern Amateur Championship and also qualified for the U.S. Amateur Championship. Sargent has two career AGA State Titles: Alabama Boys State Junior Championship (2019) and Alabama State Amateur Championship (2020).

“It's a huge honor to be named Alabama Men’s Player of the Year, especially in a year like 2020,” Sargent said. “Very thankful that the AGA put on the State Amateur and other events. It meant a lot to play in them, and it gave me a lot of confidence going into 2021.”

Women’s
Mychael O’Berry of Hoover is a junior at Auburn University. This is her first 2020 Alabama Women’s Player of the Year. She claimed her only AGA start in 2020 at the 30th Alabama Women’s Stroke Play Championship, finishing 2-under 211. O’Berry advanced to the Round of 64 at the U.S. Women’s Amateur Championship.

“This means a lot to me, especially considering the year we've all had,” O’Berry said. “I’m thankful that I had the chance to play golf this summer. The AGA has always been so fun to play in, and I've met some of my best friends through it. I'm just super grateful."

Senior Men’s
John Wright of Fairhope is the 2020 Alabama Senior Men’s Player of the Year. He finished second in the 23rd Alabama State Senior Amateur Championship. Also adding to his 2020 AGA tournament season highlights, he finished T7 in the 38th Alabama State Four-Ball Championship and T14 in the Alabama State Amateur. To ring in 2020, Wright claimed victory at the Golfweek Senior Player-of-the-Year Classic. In 1989, Wright won the Alabama State Amateur Championship.
“I’m very honored,” Wright said. “There are a lot of great names on that list in the state of Alabama from over the years, and to be recognized alongside such great players is an honor."

“While it is such an honor to be named Alabama Senior Women's Player of the Year, I'm so grateful that we even got to play this year,” West said. “Very thankful to have played golf period. I am always moved by the relationships that this sport creates and allows for us to develop. I count it a blessing!"