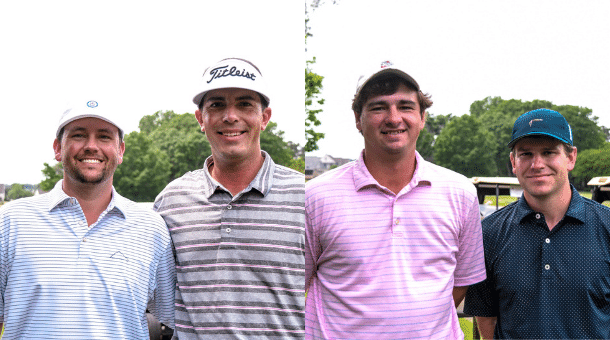 Co-leading round one of the 39th Alabama State Four-Ball Championship are Tyler Hitchner and Will Morrison of Tuscaloosa, AL and Alex Balog of Millbrook, AL alongside Daniel Burns of Hampton Cove, AL. Each team opened with a 10-under 62 to secure a two-stroke lead over five teams standing T3.

Entries are open to sides of male amateur golfers who are legal residents of Alabama and have an active GHIN® USGA Handicap Index® at an AGA member club. Maximum allowable combined team handicap is 16.8 under the USGA Handicap System™. Two players who play as partners comprise a side. Partners are not required to be from the same club. College Student Eligibility: A college student is considered a resident of their parent(s)/guardian(s) “Legal Residency Criteria” as stated in the AGA Tournament Manual unless said student (a) has no dependency on his/her parents; and (b) lives full time in Alabama.