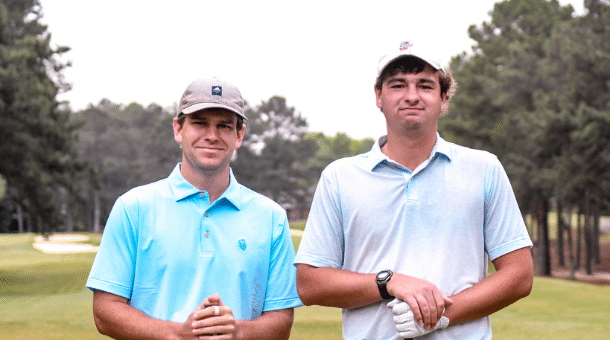 Maintaining the lead through both rounds of stroke play for the 39th Alabama State Four-Ball Championship, Tyler Hitchner and Will Morrison of Tuscaloosa, AL fired a six-under 66 for the day. Overall, their team score stands at 16-under 128.

“To sit atop the leaderboard two days in a row, it feels pretty good going into match play,” Morrison said.

Five teams went into a playoff to compete for the last qualifier’s place. Andrew Gladden of Columbiana, AL and Jon Hunt of Birmingham, AL secured the 16th seed and will move on to the Round of 16.

The match play cut includes 16 teams advancing to the Round of 16. The cut line fell at seven-under 137.

Entries are open to sides of male amateur golfers who are legal residents of Alabama and have an active GHIN® USGA Handicap Index® at an AGA member club. The maximum allowable combined team handicap is 16.8 under the USGA Handicap System™. Two players who play as partners comprise a side. Partners are not required to be from the same club. College Student Eligibility: A college student is considered a resident of their parent(s)/guardian(s) “Legal Residency Criteria” as stated in the AGA Tournament Manual unless said student (a) has no dependency on his/her parents; and (b) lives full time in Alabama.

The Alabama Golf Association is a 501(c)(3) not-for-profit educational organization founded in 1915 whose mission is to serve and promote amateur golf in Alabama. AGA membership consists of over 115 member clubs represented by over 20,000 individuals. The activities and services of the Alabama Golf Association are governed by a Board of Directors consisting of Alabama golfers who wish to serve the game and the association through service.