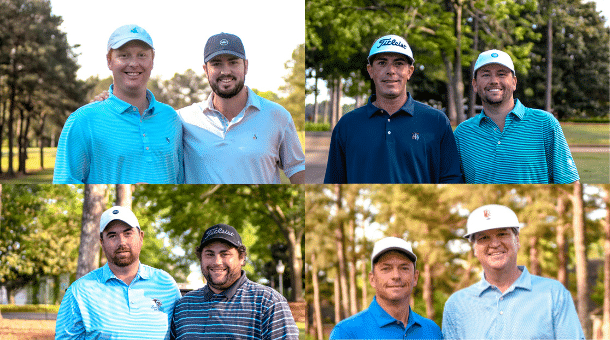 Nine seeded, Alex Balog of Millbrook and Daniel Burns of Hampton Cove won two matches with a 3 and 2 win over eight-seeded Steven Muncher and Taylor Hereford of Birmingham in the morning of Round of 16. They followed it with a 19-hole victory over one-seeded Tyler Hitchner and Will Morrison of Tuscaloosa in the afternoon Quarterfinals.

Steven Locke of Hollywood and Thomas Looney of Scottsboro collected two decisive victories with a 20-hole win over James Salter and Tobin Ayers of Auburn in the morning matches and a 1 up victory against Austin Coggin and Doug Davis of Birmingham in the Quarterfinals.

In other action, two-seeded Jeff Taylor and Shaw Pritchett of Montgomery claimed a 21-hole victory in the Round of 16 and outlasted Will McCurdy of Auburn and Zac McCurdy of Fort Payne. In the Quarterfinals, Taylor and Pritchett won 1 up over Will Swift of Vestavia Hills and Woodie Eubanks of Oneonta. This duo will square off tomorrow in the Semifinal match against Wil Clowdus of Pike Road and Will Thompson of Birmingham.

Clowdus and Thompson won 22 holes over Hunter Hawkins and Scott Weatherly of Fort Payne in the Round of 16. In the Quarterfinals, they claimed a 2 and 1 victory over Ben Moody of Mountain Brook and Jackson Beindorf of Vestavia Hills.