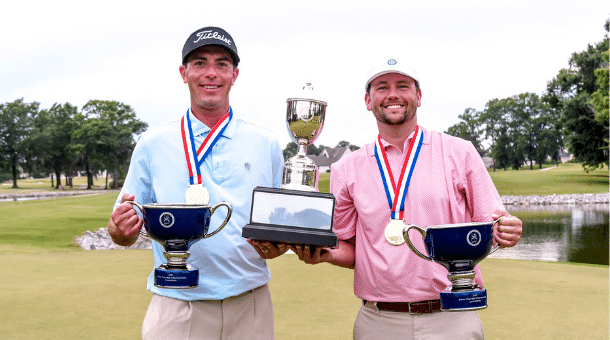 Alex Balog of Millbrook and Daniel Burns of Hampton Cove claimed the 39th Alabama State Four-Ball title to be crowned Champions. Balog and Burns remained in tight competition on the front nine of the Finals until they caught momentum on No. 8 with a putt for birdie. Their consistent game thru the back nine would prove their victory, as they steadily secured birdie putts on No. 11, 12, 14 and 16. Balog and Burns advanced past Wil Clowdus of Pike Road and Will Thompson of Birmingham by a 4 and 2 margin.

Balog and Burns held an early lead in the Semifinals, sinking a par putt on the No. 18 to secure a win, 1 up over Thomas Looney of Scottsboro and Steven Locke of Hollywood.

In the morning Semifinals, Clowdus and Thompson defeated two seed Jeff Taylor and Shaw Pritchett of Montgomery 3 and 1.