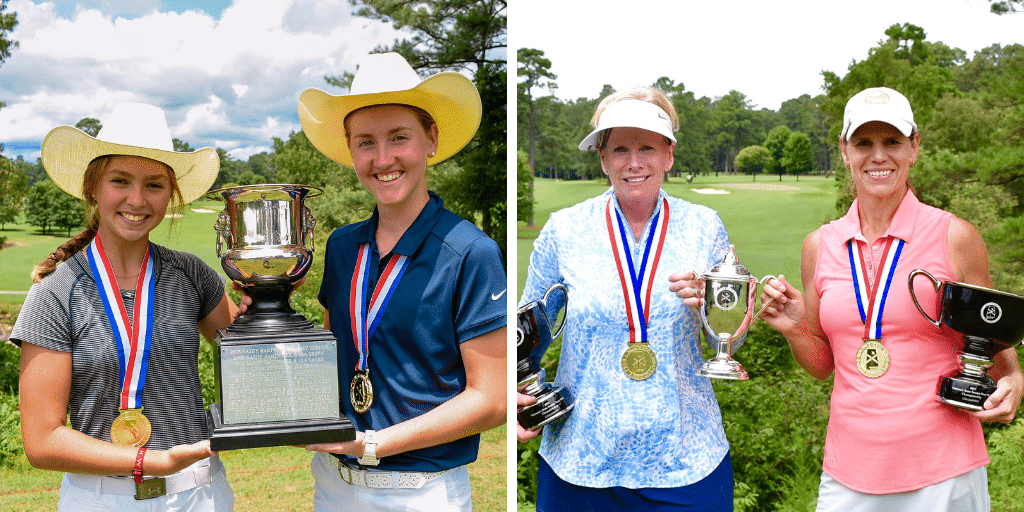 Ashley Sinclair-Curtis of Enterprise and Molly Brown Davidson of Birmingham claimed the 14th Alabama Women’s State Four-Ball Championship title, carding one-under-par 70 for the final round and five-under 137 for the tournament.

Sporadic rainfall, heavy at times, presented difficult playing conditions. Playing under such challenging weather circumstances, Curtis and Davidson relied on one another to keep the ball in play.

“The wet conditions made the course play long,” Davidson said. “We stayed focused and played through it.”

Hannah Pope of Florence and Tori Roush of Fairhope posted three-under 68 for the final round and four-under 138 for the tournament to stand second.

“Today was such a fun day,” Pope said. “The highlight of my round was on hole 17 when I holed out for eagle from 190 yards.”

Carson McKie of Hoover and Emma Pittman of Pike Road posted three-under 68 for the final round and two-under 140 overall to stand third.

Kathy Hartwiger of Birmingham and Lea Green of McCalla dominated play within the Women’s Senior Championship division. They led wire-to-wire at seven-under 64 and 14-under 128 overall to claim the 3rd Alabama Women’s State Senior Four-Ball Championship title.

Donna Lowen of Huntsville and Susan West of Tuscaloosa claimed second, posting six-under 65 for the day and 11-under 131 overall.

Amanda Miller of Albertville and Lisa Jones of Guntersville finished third in the Senior Championship division, carding three-over 74 for the day and one-under 141 for the tournament.

Lori Holibaugh of Foley and Nita Fitzgerald of Gulf Shores defeated Candy Mitchell of Springville and Lynn Glover of Birmingham in a scorecard playoff to first within Senior Flight 3. Holibaugh and Fitzgerald carded 24-over 166 for the championship.

Joy Mills and Weety Vickery of Decatur finished first in the Senior Flight 4, carding 28-over 170 for the Championship.