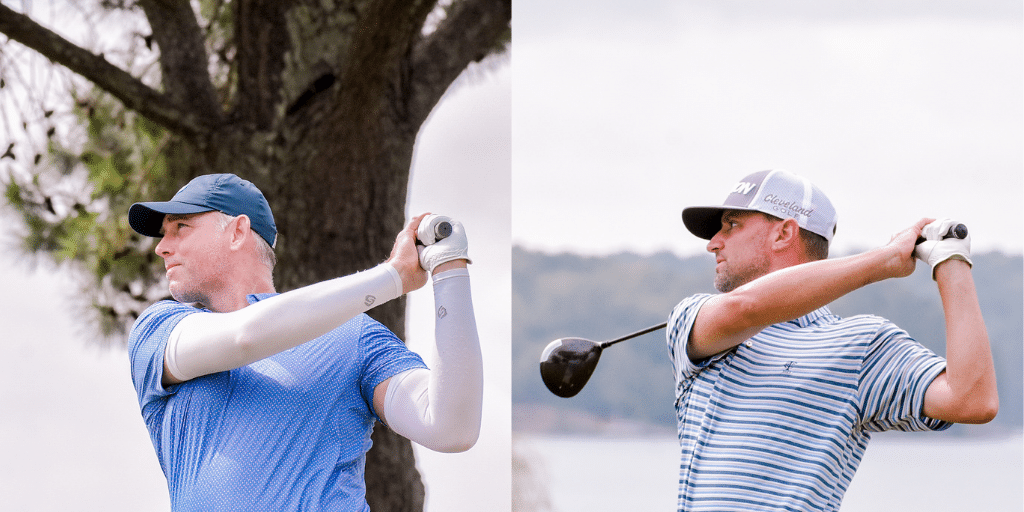 The morning wave of golfers completed play just as the afternoon wave paused play, due to weather conditions. Play paused at 1:10 p.m. and resumed at 3:15 p.m. Play was suspended due to nightfall.

Twenty-two players will finish round two tomorrow. Round two will resume tomorrow, at 7:15 a.m. Practice facilities will open at 6:15 a.m.

Maintaining the lead within the Mid-Amateur Division, Alan Coshatt of Birmingham, AL and Dalton Melnyk of Atlanta, GA remain atop the leaderboard at the third Southeast Mid-Amateur Four-Ball Championship, with a low seven-under 65. They stand 18-under 126 for the tournament.

“All we wanted was a chance on Sunday,” Melnyk says. “It looks like we have a little bit of a lead. With four teams real close to us in this kind of format, there is no lead. We need to go play hard and well on Sunday.”

Team Howle and Eubanks posted eight-under-par 64 for the day. Team Hamm and Guerin carded 10-under-par 62. Both sides remain 16-under 128 for the tournament.

Currently leading the Senior Division, David Hancock of Greenville, AL and Mark Harris of Montgomery, AL finished eight-under-par 64. They stand 13-under 131 for the tournament.

After round two is complete, we will cut and repair the field to assign pairings for round three. Round three will begin as a shotgun start at 10 a.m.

54 holes of Four-Ball stroke play. Field will be cut to low 30 scores and ties after 36 holes. The number of sides making the cut is calculated based upon the percentage of sides in each division compared with the total field. In the event of a tie for first place in the Mid-Amateur or Senior Division, a hole-by-hole playoff will be held immediately following play. The playoff holes and their order of play will be determined by the Championship Committee. All other ties will be split equally. Initial groups will be for the first two rounds; the field will be cut and re-paired by the score after the second round.

Entries are open to sides of male amateur golfers who have an active USGA Handicap Index® issued through a USGA Allied Golf Association. Maximum allowable combined team handicap is 8.8 for the Mid-Amateur Division; 12.8 for Senior Division under the USGA Handicap System™. Two players who play as partners comprise a side. Partners are not required to be from the same club or state. Both members of the side must qualify under the following age requirements: