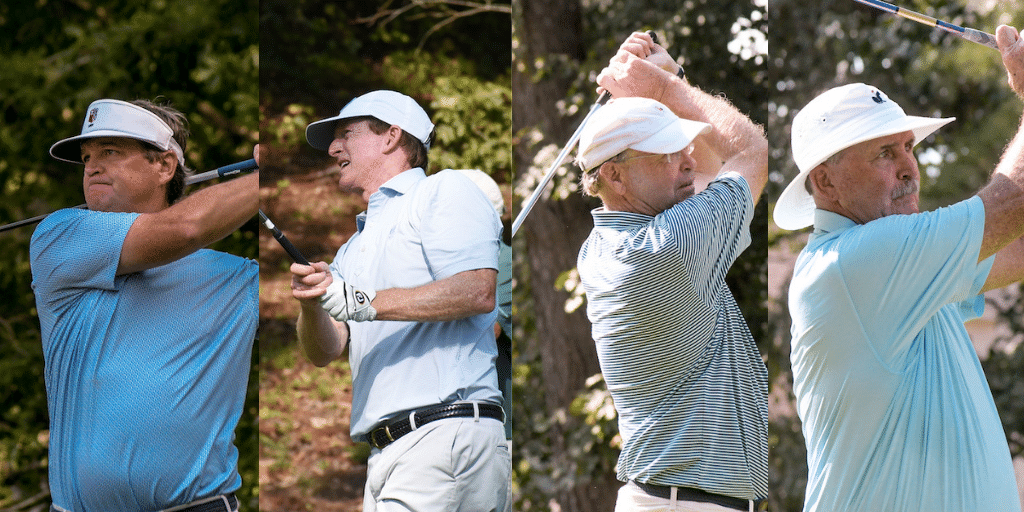 Claud Cooper of Birmingham and Jeff Taylor of Montgomery maintain their first round lead through day two of the 27th Alabama State Senior Four-Ball Championship, posting an impressive eight-under 63 for the day and 21-under 121 for the Championship.

Tied for second is the team of Emile Vaughan of Pike Road and Shaw Pritchett of Montgomery alongside Joey Holley of Troy and Steven Hudson of Birmingham. Both teams stand 14-under-par 128 for the Championship. Vaughan and Pritchett posted five-under 66 for the day. Holley and Hudson posted six-under 65 for the day.

The cut line fell at six-under 136, with 22 sides advancing to the final round of play.

Richard Jeffers of Mobile and Robert Parmar of Fairhope remain atop the leaderboard, leading round two of the 3rd Alabama State Super-Senior Four-Ball Championship, posting six-under 65 for the round and 15-under-par 127 for the Championship.

“Robert took charge and made four birdies coming in,” Jeffers says. “We are lucky to be where we are, and we’re happy!”

Bill Griffin of Dora and David Zauchin of Tuscaloosa stand second alongside Chip Woddail and Hamp Andrews of Daphne. Each team carded a 13-under 129 for the tournament.

Griffin and Zauchin posted eight-under 63 for the day. Woddail and Andrews carded six-under 65.

The cut line fell at five-under 137, with nine sides advancing to the final round of play.