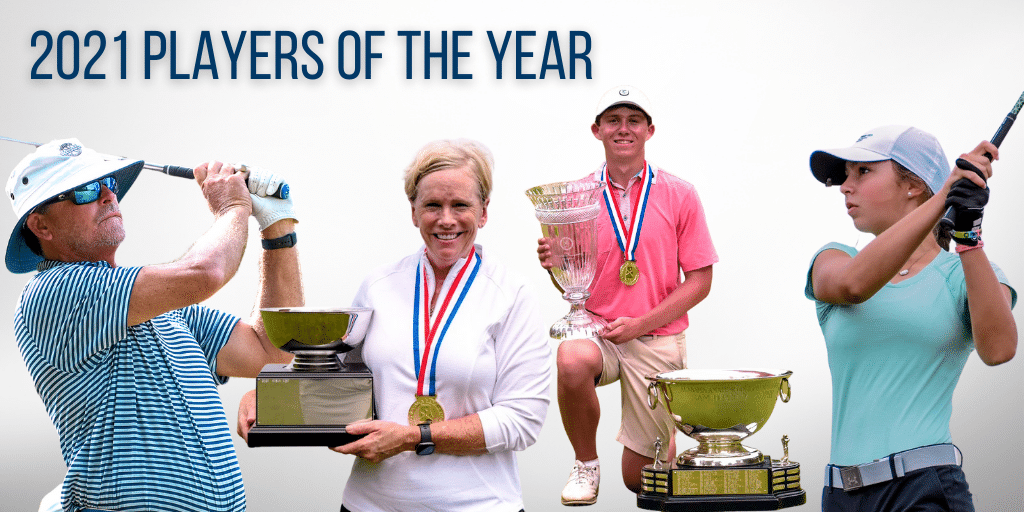 HOOVER, AL (January 11, 2022) – The Alabama Golf Association (AGA) has announced the 2021 AGA Players of the Year. To honor Alabama amateur golfers who performed exceptionally in the preceding tournament season, the AGA identifies award recipients as the number one golfer based on a season-long ranking system.

Gordon Sargent of Birmingham is a freshman at Vanderbilt University. He is one of the five individuals chosen to receive the prestigious Byron Nelson International Junior Golf Award. He defended his state title at the Alabama State Amateur Championship, finished runner-up at the Western Amateur and was a quarterfinalist at the U.S. Boys Junior Championship. He also advanced to the Round of 64 at this year’s U.S. Amateur. Sargent finished second at AJGA’s Ping Invitational, third at AJGA’s Simplify Boys Championship and went on to finish fourth at AJGA’s Rolex Tournament of Champions. Sargent has three career AGA State Titles: Alabama Boys State Junior Championship (2019) and Alabama State Amateur Championship (2020 & 2021).

“It's pretty special to be named as the Alabama Men’s Player of the Year,” Sargent said. “Jump-starting the summer and winning the State Am was big. It gave me my momentum heading into my freshman year of college.”

Molly Brown Davidson of Birmingham is a freshman at Hewitt-Trussville High School. This is her first Alabama Women’s Player of the Year. She won multiple Championship titles this season, including the following events: SJGT Championship, Lee Hodges Classic, Mid-South Masters, Indian Pines, Callaway Gardens Junior Classic and the Cypress Lakes Golf Club. She finished second in the Alabama Women’s State Amateur, Alabama Women’s Stroke Play, Alabama Girls State Junior and Lake Mary Junior Open. As she maintained top 5 finishes throughout the entirety of her season, she finished T5 in both the AJGA Huntsville Junior and Magnolia Grove Junior Classic.

“It is such an honor to be named for both the Alabama Girls State Junior Player of the Year and the Alabama Women’s Player of the Year,” Davidson said. “I’d like to thank the AGA for helping me achieve my goals and better myself as a person. All glory to God for giving me the opportunity to compete with these incredible players. I look forward to the upcoming season and playing in more AGA events!"

“I’d like to say what an honor it is to win for the second year in a row,” Wright said. “We have such a strong and competitive senior class, which makes it all the more rewarding.”

"It's really a good ending to last year and beginning to this year," Hartwiger said. "What a neat way to end last year's season and motivate for this next one. I love the AGA of course, and it's a great honor to receive this award."

2021 Junior Players of the Year

Nick Dunlap of Huntsville is a senior at home school. He was named Champion at the U.S. Boys Junior Championship, winning his final match 3 and 2. He preceded this triumph by winning this year’s Dustin Johnson Junior World Championship, qualifying for the U.S. Amateur with medalist honors in Decatur, AL and claiming AJGA’s Polo Golf Junior Classic title. Dunlap finished T2 at both the Boys Junior PGA Championship and AJGA’s Wyndham Invitational. He notched several top-fives in other national junior events, such as the 26th Bobby Chapman Junior Invitational and the Sea Pines Junior Heritage. Dunlap will go on to represent Alabama in next year’s U.S. Open, at The Country Club in Brookline, MA. Dunlap has one career AGA State Title: Alabama Boys State Junior (2018). Dunlap was the 2018 Alabama Boys State Junior Player of the Year, and he is the 2021 Alabama Boys State Junior Player of the Year.

Dunlap recently signed his letter of intent to play college golf at The University of Alabama.