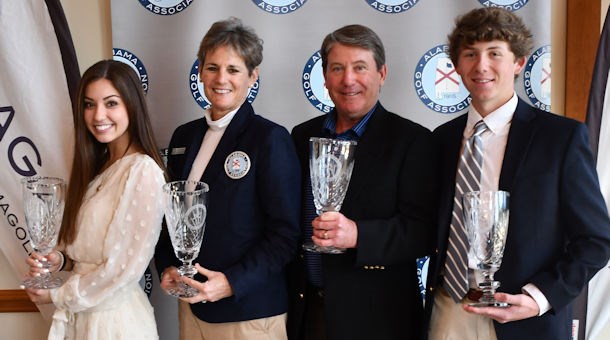 HOOVER, Ala. (March 10, 2020) -- On Saturday, March 7, 2020, the Alabama Golf Association’s Annual Meeting, Board of Directors meeting and Awards Luncheon was hosted by Old Overton Club in Vestavia Hills.

Annual Meeting and Board of Directors Meeting

At the Board of Directors meeting, three members were elected to serve a one-year term on the AGA Executive Committee along with the four officers: Joey Dzwonkowski of Mobile, Immediate Past President Grantland Rice III of Birmingham and Susan C. West of Tuscaloosa.

The Alabama Golf Association recognized several individuals with the Joe H. King Award, the Sadie Roberts Volunteer of the Year, Players of the Year, All-State Junior Teams and 2019 champions at an awards luncheon that followed the annual meeting.

Alabama All-State Junior Teams: All-State team selections are determined from junior golfers performance over the past 12-months (September 1, 2017-August 31, 2019) using the Alabama State Junior Golf Rankings System. The top 15 boys and girls are awarded and placed into First, Second and Third teams based upon their final ranking.

The Alabama Golf Association is a 501(c)(3) not-for-profit educational organization founded in 1915 whose mission is to serve and promote amateur golf in Alabama. AGA membership consists of over 110 member clubs represented by over 19,000 individuals. The activities and services of the Alabama Golf Association are governed by a Board of Directors consisting of Alabama golfers who wish to serve the game and the association through service.

AGA is the USGA's Allied Golf Association to deliver core services in Alabama such as conducting national championship qualifying, administering the World Handicap System including the GHIN service, course & slope rating and education. The AGA annually conducts 23 championships and team match competitions for men, women, juniors, and seniors. The AGA also conducts Alabama high school golf championships and assists with many collegiate events including the SEC Men's Golf Championship. In addition to competitions, the AGA administers the AGA Women's Scholarship Fund that is dedicated to assisting young female golfers in higher education and supports the Alabama Turfgrass Research Foundation.